Korean Couples and Their Matching Clothing

One of the funniest things about this culture is the clothing. Fashion rules here and I don't even mean that in a name brand sense. Of course, you'll see every store you'd see in NYC's 5th Ave all over the place, but the best shopping comes from places like the subway underground malls where clothing can be like 5 bucks (don't even get me started on the hobby that is finding crazy 'Engrish' shirts). Every style exists here, and right now the 80s are definitely back in full force for some of the Korean College Kids. We're talking fluro and high tops, and funny hats and sunglasses with baggy shirts everywhere. It's amusing actually. The women here will also wear heels to every occasion - even to hiking or the beach!

But one of the greatest things to witness here is the matching clothing by couples. Everyone here has some sort of story regarding this phenomenon and it's great. A Korean once told me that it's a test from the girl in the relationship. If the guy doesn't wear it then that means he doesn't love her. SO the poor guy is trapped into wearing something he probably does not want to wear. I heard another story once where a couple was witnessed at an airport and a woman broke into hysterics because the man was not sitting on the right side of her so their t-shirts could make sense.

I saw one recently and I actually followed the couple and asked to take a picture of them and their shirts. They were walking (in the correct order) and a stick figure is holding a can to his ear and the line stretches across his shirt to the girl's shirt who's got the other end and has a heart. Absolutely adorable. And something I would never, ever ever subject my significant other to. 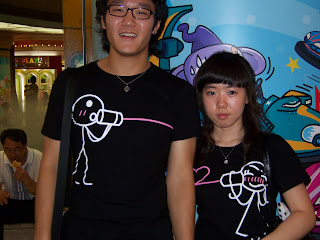 (This girl does not look and was not happy about this whole thing - the guy found it hilarious though).
Posted by Unknown at 3:50 PM

HA! I knew this trend existed last year, glad to see it's still in full effect. One of my favorites. Love the "test" idea. Probably like that awkward "just starting to hold hands" stage I remember from high school, only in otherwise awkward T-shirt form. Sounds like something I should try now ha.

I just saw this at the Seoul airport! I was so amused and confused at the same time.